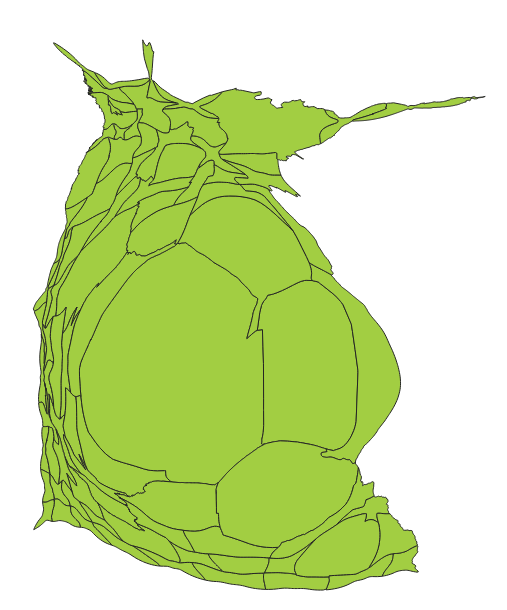 Cartograms are a type of map projection that distorts the size and shape of an area based on the percentage of a particular attribute is to the total for a given area.

These are my favorite types of maps. Anyone interested in maps around the 2000 election has probably seen this map. That makes it look like a heck of a blow out. However this map tells a false story. It portrays the most important piece of information being the size of the landmass people are sitting on rather than the votes in that place.

The following map although a bit difficult to look at tells a much different story with similar data. The size of the county is in proportion with the size of the population of the whole country. You can see the areas around New York City are larger than all of North Dakota, Wyoming, Montana, South Dakota and Nebraska and probably a few others combined.

Both of the above maps tell a different story in pictures. They are both 100% correct at telling the stories they are designed to tell. So next time you see a map dig into it, what is the story it is trying to tell? What are the other ways that story could be told? Are there decisions the cartographer made to influence you?

There is a constant fight in Minnesota that the Metro area is over represented in the funding, and political representation. Considering the cartogram above is one way to assess that argument from a slightly different angle.